CDP's
The
Electronic Constitution
Of
The United States of America

Do you understand how the U.S. Government is organized?

Do you wonder where your rights as an American come from?

Do you understand the reasoning behind the electoral college used to elect the President and why it was enacted?

Are you confused over how Congress and the Supreme Court works?

Do you want to know more about the U.S. Constitution?

We have developed a program to address these and many other related questions you might have concerning the United States Constitution. This program of ours is called The Electronic Constitution

In our program you will find: 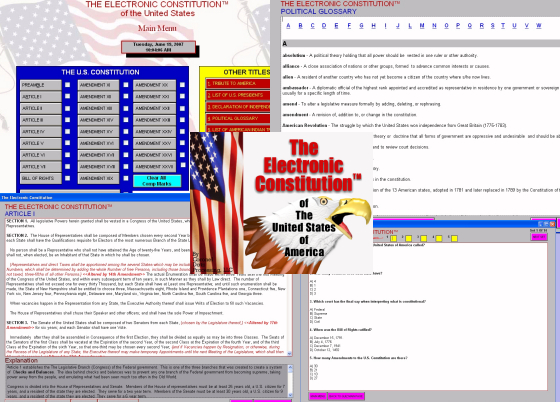 We have added a special tribute within our program dedicated to all those who love and cherish freedom.

This tribute shows great American heroes, plays patriotic music in the background, displays many U.S. symbols and icons, and gives some history of our "GREAT" Nation.

So get your copy of our program today!

By ordering on-line today, we will deliver the program to you via a download link which means you can be up and running with The Electronic Constitution™ within 24 hours.